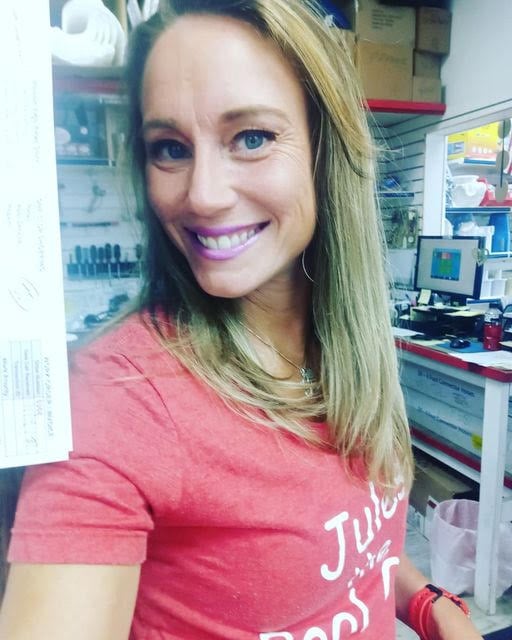 It’s in the water!  It’s in the air! An invisible evil that can harm you short-term and where the long-term effects are not definitively known.  We are talking about chloramines, also known as combined chlorine. Specifically in a natatorium (A swimming pool, typically indoors). 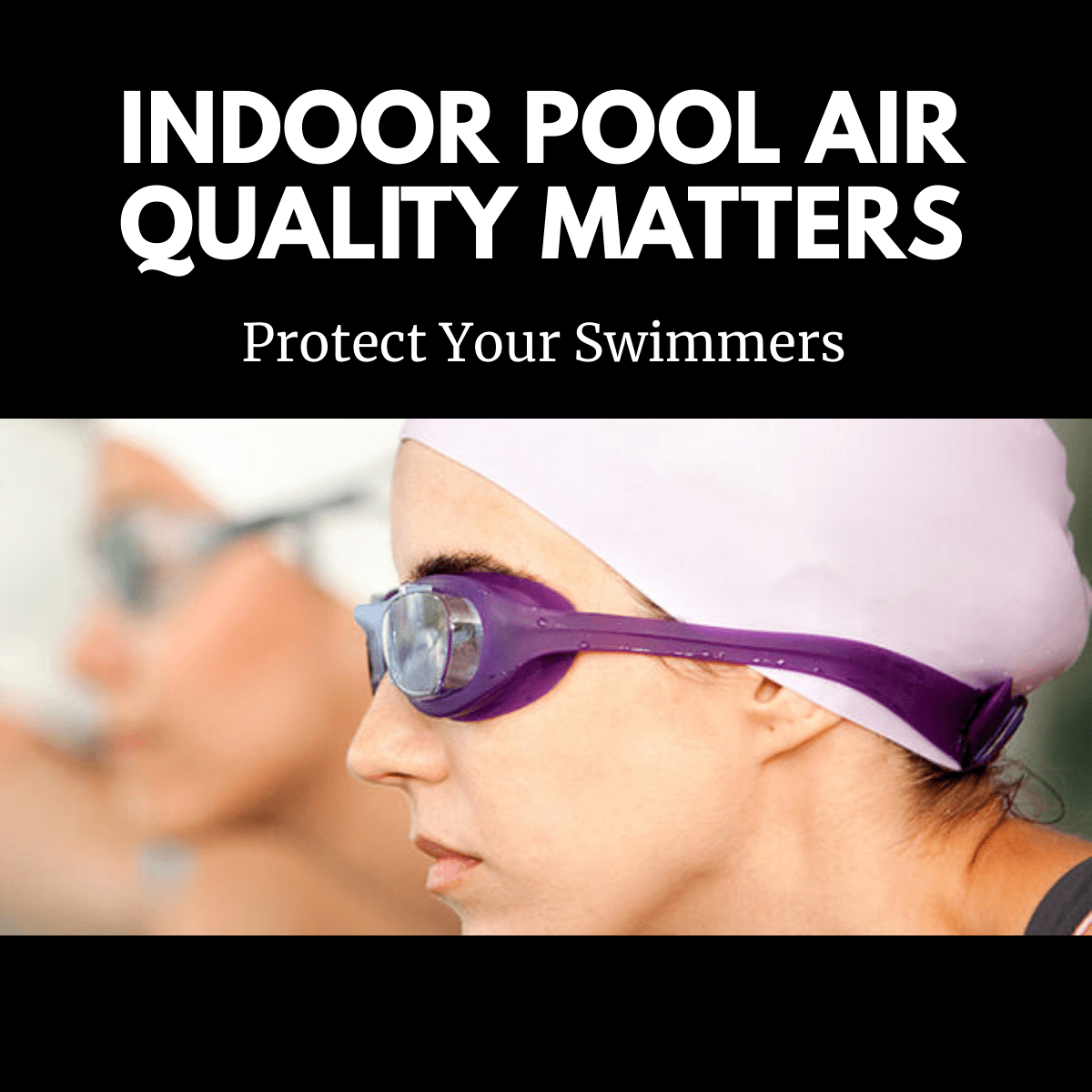 We have all walked into an indoor water facility and been hit with “pool smell”. Rudy Stankowitz, a Pool Industry Veteran, Analyst, Columnist, Author, Educator, and Influencer warns,

“If you ever walk into a natatorium and get that smack-in-the-face chlorine smell that makes your eyes sting and tear, turn around and leave!”

We all know that chloramines are irritating while in the pool, but have you ever given any thought to the harm of the air quality inside the indoor swimming pool facility?

What they are breathing in is a harmful collection of molecules. When you enter a building that has an indoor pool, be it a hotel, school, recreational facility, gym or swim school, if you have a strong smell of chlorine, that's actually very bad! Poor commercial pool chemical management practices can lead to the wrong type of chlorine in the pool and to the pool becoming susceptible to spreading disease.

The CDC says exposure to poor indoor pool air quality caused by mismanagement of the chlorine levels may include symptoms like difficulty breathing, coughing, stinging or red eyes, wheezing, aggravated asthma, and even increase sensitivity to other irritants in the environment. Think about it.  If the chlorinated air can literally rust metal, imagine what it is doing to our lungs? If it is so harmful, why isn’t anything being done about it?

Other recreational water illnesses—such as skin, ear, respiratory, eye, and other infections—can be caused by germs that naturally live in the water and can be caused by poor indoor pool water and air quality.

“There is no standard that regulates the amount of chloramines in indoor air at public swimming pools or spas”- The Anne Arundel County Department of Health.

What are Chloramines?  What Causes Them? How Do They Get in the Air?

If you were to utilize the Google dictionary to search for  “Chloramines” they are described as “an organic compound containing a chlorine atom bonded to nitrogen, especially any of a group of sulfonamide derivatives used as antiseptics and disinfectants.”  Huh?  Let’s break it down.  The difference between free chlorine and total chlorine is going to give you a measurement of combined chlorine, AKA...chloramines.

Chloramines are irritating, uncomfortable, and useless in the pool with respect to being a disinfectant.  In the air, they are also harmful.

According to the CDC, children, pregnant women, and people who have health problems or take medicines that lower their body’s ability to fight germs and sickness—such as people whose immune systems are weakened because of cancer, an organ transplant, or HIV—are most at risk for recreational water illnesses.

The most common causes are people not showering prior to getting into the pool, sweat, dirt, and yup...you guessed it. Pee.  We don’t swim in your toilet so please don’t pee in our pool.  A lot of facilities open doors or windows to try to get rid of the smell.  Did you know that cold air can actually create a cloud of harmful vapor right above the pool?

There are 3 types of chloramines: monochloramines, dichloramines, and nitrogen trichloride, known as trichloramines.  These molecules move into the air as the bather load increases because this increases their production.  Warm temperatures and water features such as slides and sprayers only exacerbate the chloramine levels in the air.

It's important to realize that not only are chloramines harmful, they're also released into the air when water is turbulent, such as when swim meets or pool parties are going on.

It's also important to realize that being molecules (as opposed to atoms like nitrogen or oxygen) they're heavy, which means that they concentrate just above the surface of the pool water, right where swimmers and athletes are breathing.

What Can We Do About Indoor Pool Air Quality?

A UV system is one way to get rid of chloramines.  When a UV filter system is placed in the indoor pool’s filter and as the water passes through the little buggers get zapped by it and thus destroyed.  But an average commercial UV system can run upwards of $30,000.  Yikes!

Another way to get help to prevent chloramines from contaminating indoor pool air quality is to somehow enforce all swimmers to shower before getting into the pool and not to urinate in the water.  Yeah...good luck with that.  Kids, lazy people, and even professional athletes pee in the pool all the time thinking, “Oh, the chlorine will take care of it.”  They aren’t wrong.  The chlorine does its job and bonds to the ammonia, nitrates, and other organic and inorganic materials.  When this occurs it becomes what is known as chloramines

What about increased ventilation?  “The majority of indoor pools I’ve visited seem to have inadequate air quality control measures.  The most obvious is the potent odor of chloramines.  On these pools, you can usually see corrosion on the ventilation system and any metal that is near the pool.  On the other side, a properly ventilated pool you {don’t}”, says Kevin Stempien of X-Pert Pool Service in Pennsylvania.  Proper ventilation usually means around a 15% air turnover.  It uses units that create additional “make up air”.  Unfortunately, to conserve energy and save money, many aquatic centers are going the other direction, limiting bringing in fresh air to the pool area to save heating costs.  These systems simply recycle the air.

The best way to prevent chloramines from degrading indoor pool air quality is to maintain the pool chlorine level at the right amount. However, since pools have varying levels of usage, and free chlorine is used up faster when pool usage is higher, such as during swim meets perhaps, maintaining proper chlorine levels means regular, as in hourly, testing.

However, one CDC study found that more than 10% of routine inspections of public pools, hot tubs/spas, and water playgrounds (for example, at hotels/motels and waterparks) led to immediate closure because of serious violations, such as improper chlorine or bromine levels.

That's why testing the water often with a commercial-grade test system, such as a Lamotte Spin Touch integrated with the PoolShark H20 app which notifies people when tests are missed, and calculates exactly the right amount of chlorine to add at any given moment in time is a best practice in the commercial pool industry.

Well-balanced pool water does not include combined chlorine.  While the exact number varies from county to county it tends to hover at 0.2 ppm as the maximum allowed reading for combined chlorine.  The easiest way to keep your pool water balanced and ensure the lowest level of combined chlorine possible is to use Pool Shark H2O.  This secure software solution provides instant water analysis and chemical dosages for each water test entered.  Health department compliant pool logs are generated automatically eliminating the need for soggy paper.  It is a win-win situation.  You keep your pool and its swimmers safe and keep yourself organized and efficient at the same time. 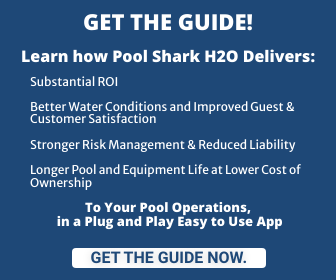